Gulmarg In Winters: A Gem in Kashmir’s Crown

Gulmarg In Winters: A Gem in Kashmir’s Crown

There is a plethora of beautiful locations as you make your way up to North India. The hilly landscape, lush meadows, bushy forests and crystal clear rivers are enough to make any heart swell with a deep appreciation for Mother Nature. However, none are so beautiful when compared to the sights of Kashmir. Particularly, its most popular skiing destination, Gulmarg.

As a tribute to Lord Shiva’s wife, Parvati, Gulmarg was earlier called ‘Gaurimarg’, meaning ‘the fair one ‘, by shepherds in the area. This was later changed to Gulmarg by a ruler of Kashmir sometime in the 16thcentury. This hill resort had once been a summer retreat fit for kings.

Gulmarg’s charm dates back to the time of Jahangir, the Mughal Emperor who had his own gardens established there, with many species of flowers in bloom. Later, in 1927 the Ski Club of India was setup by the British to promote adventure sports. Every Christmas and Easter they would hold ski events, bringing in foreign explorers to the area.

Now the highest and longest ski slope in all of Asia, Gulmarg, is a prime location better known as the Winter Games Capital of India. Gulmarg can be visited at any time of the year. Although, the best time to visit for a good slush of snow is between early January to early March, when the snow is at its thickest. 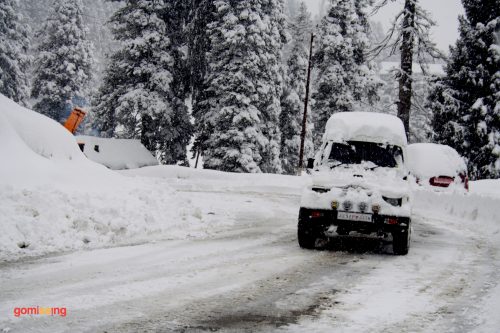 On the way to snow-covered Gulmarg

One of the best things to experience while in Kashmir has to be the Gulmarg Gondola. This Gondola is the second highest in the world. While on this ride, you’re likely to forget all your troubles and the rest of the world with it. Pure white snow glistens as it engulfs meadows and mountains alike. There is nothing like being transported overhead such a scenic landscape.

The Gondola operates from the Gulmarg Resort which is over 8,500 feet to Kongdoori Station. This is the first stage of operation of the Gondola. The second stage takes passengers even higher, nearing 12,300 feet to Kongdoori Mountain. The Gulmarg Gondola has an amazing capacity and can transfer 600 people per hour. It isn’t open every alternate Mondays, so plan and ensure it doesn’t fall on the Monday that the gondola is getting serviced. Also, be prepared to stand in a line to get your tickets. Tickets can be booked online or bought at the location itself, but there is still a queue one needs to patiently line up in. However, when you think about the bigger picture, standing in a queue full of tourists is a small price to pay to behold such a beautiful sight.

Another must-do is a visit to the Gulmarg Golf club. This premier Golf Course stands at 12,293 ft and is India’s longest golf course located in the heart of the Gulmarg Ski Resort. Golfing in Gulmarg is. You can bring your own car and enter the golf course too. Though it is pleasant and lush green in the summer, as one would expect, it is a perfect snow-covered contrast in the winters. It becomes a playground for all things winter during this time, with thick sheets of ice covering its surface.

Another notch in your belt while in this area is to try your hand at some adventure sports. Gulmarg is known for skiing and there are courses with instructors who can turn your skiing skills from fumbling to fabulous. Enter: Highland Park. This is the perfect slope for beginners as the incline is comfortable and longer. Once you’re done with the so-called ‘baby slopes’, your instructor will upgrade you and you can take the Gulmarg Gondola and try on something more serious.

Skiing in Gulmarg with Monkey Hill in the backgrop

Equipment rental and instructors are easy to come by; however, you must be cautious. Several instructors at the slopes are under-qualified and will only be able to give you ad-hoc skiing lessons, which lack both basic safety standards and technique. For professional skiing lessons and skiing trips, contact one of the reputed companies in Gulmarg which have been conducting ski trips and courses for many years.

You are sure to remember Gulmarg’s striking snow-scape long after you leave. Nothing quite leaves an impression on our memories as the charms of Kashmir.