When it comes to cycling destinations, GoMissing goes all out to bring to you charming, eclectic, adventurous and offbeat destinations. Last week saw us heading out to George Town, Penang in Malaysia.

We were heading there to sample Penang’s unique cuisine, see a thriving culture of various ethnicities living in harmony, admire its colonial and local architecture and see the famous street art of Earnest Zacharevic, South Asisa’s Bansky whose works now adorn streets all over the world.

Named after Britain’s King George III, George Town is located on the north-east corner of Penang Island. The inner city of George Town is a UNESCO World Heritage Site admired for its “unique architectural and cultural townscape without parallel anywhere in East and Southeast Asia”. The heritage quarters consist of colonial architecture built during British rule over the Straits Settlements (Penang, Singapore and Malacca), mixed with Chinese shophouses, five foot ways and places of worship of various religions. 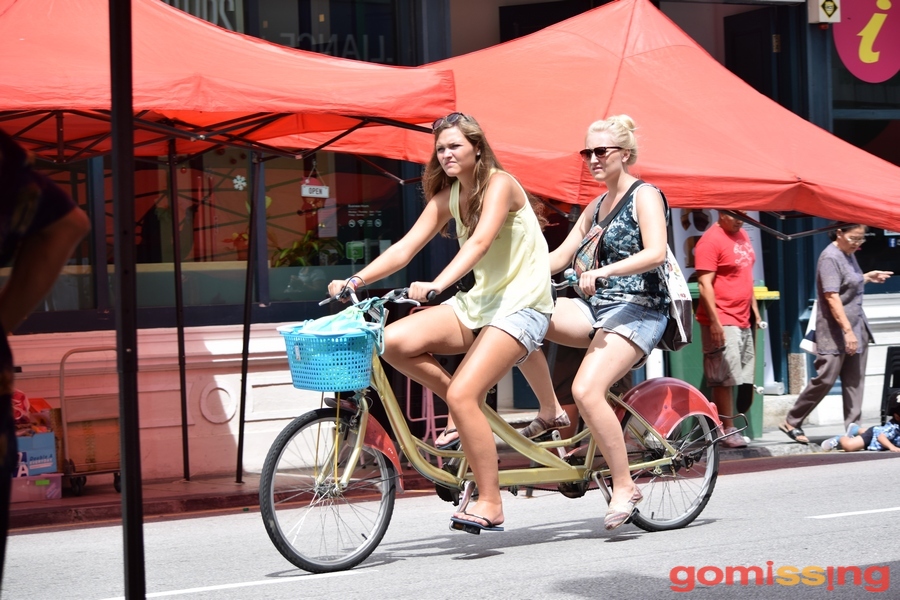 Walking in George Town, a graffiti on one of the walls of Bishops Street caught our attention. ‘Drive Less Cycle More’ it said and we agreed. The streets of George Town were built when people took cycles or their horse driven carriages around the town. Nothing could have made us happier when we saw tourists rent out a bike to go about town. This was definitely GoMissing kind of town.

Renting a Bike, we were all set to explore the town. 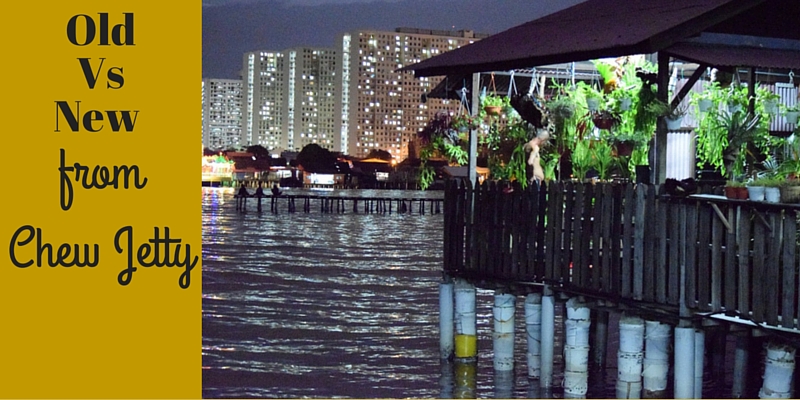 Our first stop were the Clan Jetties.  George Town has six clan jetties where clans of Chinese settlers lived. These jetties came about after the construction of the Quay in 1882 and soon settlements grew around these jetties that were used for loading and unloading of goods and for the mooring of sampans (boats).

Each jetty was dominated by a particular Chinese clan and got its name after the clan name. It seems these clans had constant rivalry over work and were often in bitter feuds with each other.

We walked around Chew Jetty, one of the most tourist friendly jetties. Built on wooden stilts, the houses alongside the jetty are touristy and sell souvenirs and refreshments.

The walk gave us first hand view of how the settlers would have lived hundred years back. 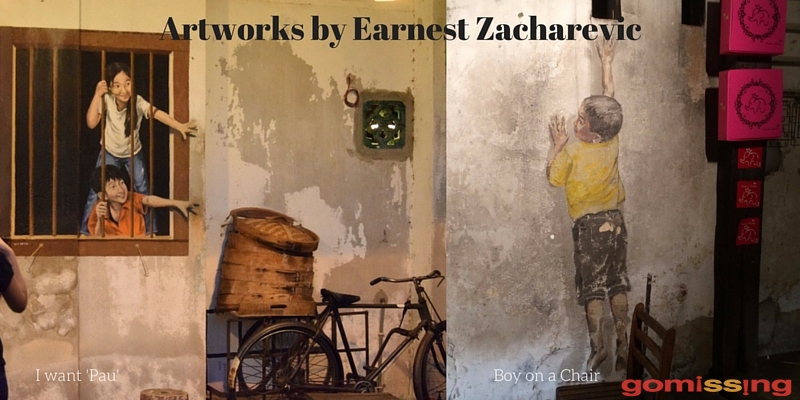 The streets of George Town are nothing short of an art gallery. In 2010 Penang State Government started a competition to brand George Town as a UNESCO World Heritage site. The winners ‘Sculpture at Work’, installed 52 unique witty, humorous anecdotal illustrations on city walls that described the area. There was ‘Jimmy Choo’-a sculpture marking the place where the famous designer Jimmy Choo started his apprenticeship. There were plenty sculptures describing the way of life of Tamil settlers, like ‘Untrained Parakeet’- showing Indian parrot astrologers who used parrots to tell fortune and ‘Too Hot’ a caricature on the famous Weld Quay-the birth place of Kelinga Mee, a spicy Indian Noodle dish created to whet the appetites of sailors and port workers.

In George Town Festival 2012, a young Lithuanian artist, Earnest Zacharevic was commissioned to paint a few murals. His ‘Kids on Bicycle’ became one of the most photographed murals in the world. He has contributed significantly to put Penang on the world map with his beautiful paintings. 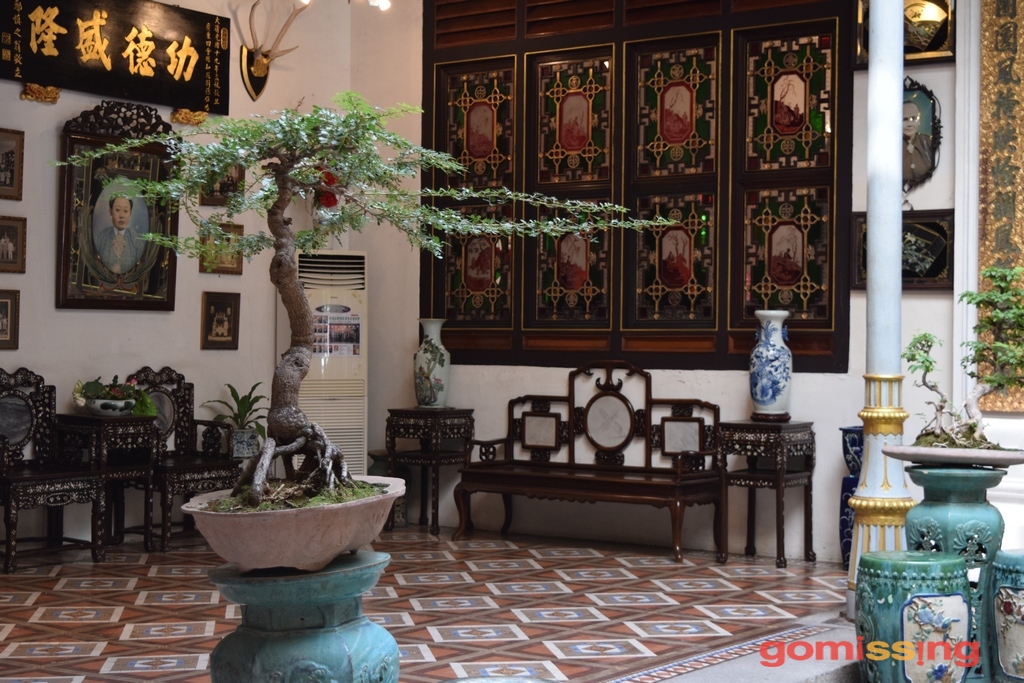 The Peranakans, also known as the Babas and Nyonyas, are a prominent community of acculturated Chinese unique to this part of the world, especially in the Straits Settlements (Penang, Malacca and Singapore). Our next stop on our cycle tour was to Green Peranakan Mansion on the Church Street.

Adopting select ways of the local Malays and later, the colonial British, the Peranakans created a unique lifestyle, customs, legacy of antiques and cultural influences like cuisine and language. The Pinang Peranakan Mansion was the typical home of a rich Baba of a century ago restored to offer a glimpse of opulent lifestyle, customs and traditions. The mansion houses over 1,000 pieces of antiques and collectibles of the era on display. The mansion had once served as the residence and office of Kapitan Cina Chung Keng Kwee. Though not a Baba himself, his Chinese courtyard house was much like a typical large Baba home of eclectic style, incorporating Chinese carved-wood panels and English floor tiles and Scottish iron works.

The free tour guide at the museum took us around the ornate mansion and regaled us with his narration of customs related to Baba Nyonya life. 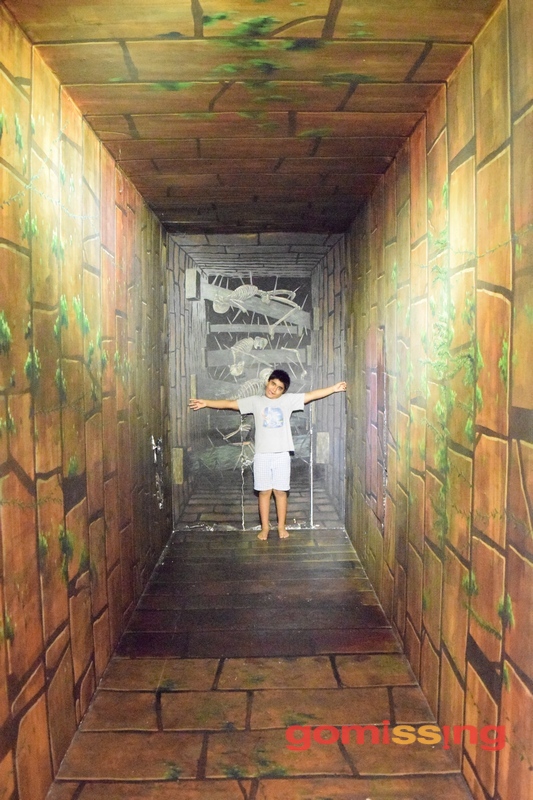 In a well from Indiana Jones

A bit of Tomfoolery

With two children in tow, a purely heritage ride of the city was not possible. We threw in some tomfoolery at a Penang 3D Trick Art museum. The museum has 45 two-dimensional paintings on walls, floors and ceilings that appear to pop up on the surface and come to life. Basically it meant that you can photograph yourself being eaten by an Anaconda; chased by a T-rex and so on. It also meant letting go of all inhibitions, make faces and twist the body in silly contortions to get the right 3D effect. It was super silly but had the children in splits all around. It was great fun and we highly recommend doing this.

A good part of any discussion we have at GoMissing revolves around food. Collectively we spend nearly 50% of any trek, expedition, tour planning on discussions around the food options that the place offers. George Town is just the right place to head if you are as serious about the food you eat as we are. Penang cuisine is the cuisine of the multicultural society of the region as it offersa diverse and exotic mix of Malay, Chinese and Indian cuisines. It was voted as the Top Culinary Destination by Lonely Planet in 2014, and a ride around Geroge Town will tell you why. Aromas from hawker stalls of piping steam boats, Roti canai, nasi kandar float about in the air inviting you to sample their wares.

We sampled food off a steamboat near Chew clan jetty, had irresistibly buttery buns from Ming Xiang Tai pastry shop whose wall has another famous painting of Earnest depicting the time when bakers peddled around the town early in the morning selling freshly baked ‘pau’ buns. Titled, ‘I want Pau’, it was under this charming painting that we stood and devoured the melt in the mouth ‘Pau’. 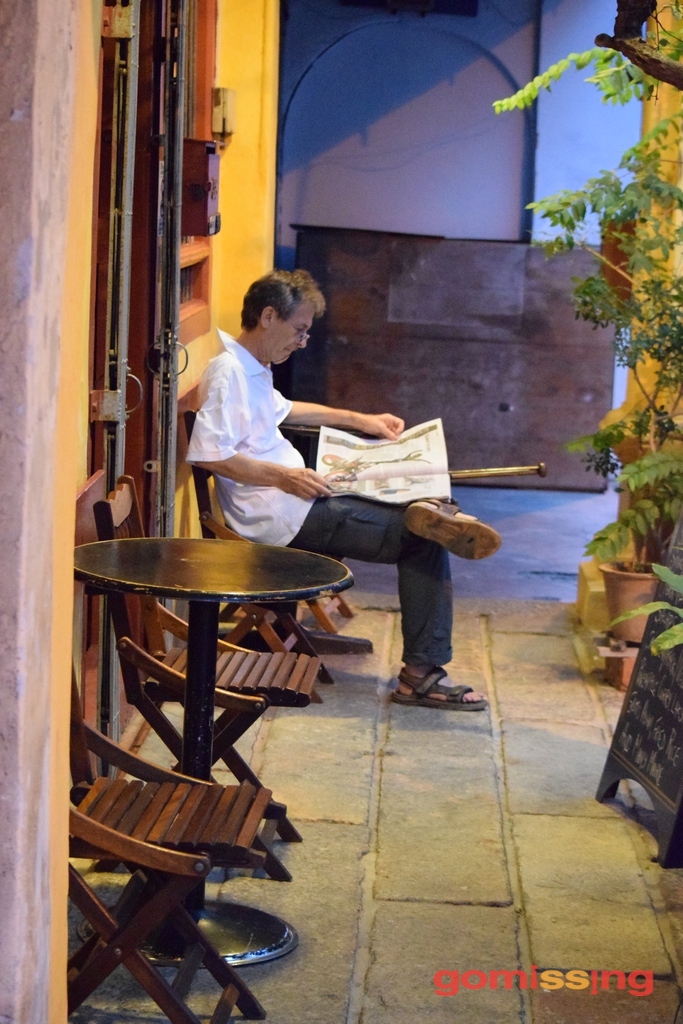 Catching a quiet moment at Edelweiss

In addition to the hawker food, there were two more gems that we discovered. One was Edelweiss, an eatery on Armenian street run by Teresa and her Swiss husband Urus. The place was full of warm hospitality extended by the elderly hosts. Sensing our interest in the giant clock prominently positioned at the cafe, Urus shared how he restored and installed this over 100 year old German Church Clock here at George Town. Teresa, a Malaysia born Indian fussed around us and ensured we had a wholesome meal.

The second gem we discovered was called The Book-Sandwich Cafe. The name is a misnomer as they serve so much more than sandwiches. The duck chops and Pork chops we had were astounding. Since one of us was a complete vegan, they served the most amazing, hearty meatless Ratatouille Sandwich.

We completely enjoyed our ride through the town. The streets were neatly marked for cyclists and the right of way belonged to pedestrians and cyclists. Motorists and even bus drivers were considerate towards cyclists and that was perhaps why there were numerous children riding the streets freely. Wouldn’t we want such places back home too?

Fond of travelling, outdoors and adventure?

You are at the right place! Join the growing community of GoMissing adventurers and never miss an alert from us! Get monthly digest of travel ideas and opportunities right in your mailbox.

You have Successfully Subscribed!

PS: Trust us, we will never spam your mailbox with unnecessary salesy, spammy, pushy offers. We hate those too!